Maier Sports organised a group trip with a number of journalists during the early part of September 2020 to the area around the town of Ledbury in the country of Herefordshire.

Rob Stewart shares his thoughts about the two days exploring the area and getting the most out of the Maier Sports outdoor jacket and walking trousers.

During the early autumn, the faint scent of apple hangs across the low lying valleys between the city of Hereford, the River Wye and the town of Ledbury. The air is clear during this late summer period and despite being just a few hours from London and an hour from Birmingham, the views from the top of the Marcle Ridge stretch for over 50 miles in some directions, with not a city in sight.

I live in the town of Ledbury, a historic rural centre known for its black and white buildings and famous English poet, John Masefield (more recently for resident Liz Hurley, occasionally spotted in the local Greggs). But it’s rare to have any visitors – the country of Herefordshire has no major roads and there’s never any need to pass through it.

The area is surrounded by fruit, including the apple – cultivated over 1000’s of years from what was originally wild fruit found only on the lower slopes of the Tien Shen Mountains of Kazakhstan, it now provides the ingredient for one of our favourite drinks…cider.

But we’re not here for that, we’re here to test out some of the Maier Sports outdoor clothing and explore the land.

Our group of 6 meets up with local guide Carl Flint on day one (out of two) at The Market House in the centre of Ledbury. The Market House itself was built between the years of 1617 and 1668, delayed by a variety of design changes, but a cattle market has existed on that spot since 1122, when the market place was established.

We walk up through Church Lane, a cobbled pedestrian way that takes you back 100’s of years, with only the sound of vehicles in the distance taking away the illusion of time travel. Passing the Prince of Wales Pub – the kind of inn drovers would pop into for an ale during the 18th Century, we trudge up to St Michaels Church. The separate tower, it dominates the town and can be seen from miles around, dates back to the 13th Century, but there has been a church on the spot since the 700’s.

We look like a group of missionaries or pilgrims, but our uniforms are strictly Maier Sports branded and there’s no time for prayer, Carl takes is up and over the hill behind the town where we can see the Black Mountains of Wales in the distance – famed training ground for Herefordshire’s Special Forces regiment, the SAS.

We loop round and end up back at the Prince of Wales pub for a well-deserved local cider from nearby Weston’s, one of the country’s top producers.

Our home for the night is Woodside Lodges on the outskirts of town. A collection of wooden chalets, camping pitches and a bunkhouse……we’re in the bunkhouse. Its elevated spot means we get views of the Marcle Ridge as the sun sets to the west, but whilst I fire up the BBQ, our group joins Liz Knight from Fine Forage Foods to explore the grounds in search of wild plants that will enhance our dinner!

Unfortunately I had a BBQ to light, but Linda Torstensson from Maier Sports UK joined the group and said:

Hedgerows will never be the same again, within 200m of our lodging nature had a myriad of wild foods on offer. Remember Dandelion and Burdock? In the wild these leaves grow together and while not much from the plants can now be found in the drink, dandelion leaves are an excellent source of potassium, Vitamin A & Vitamin C and great added to salads. At eye level, rosehips are another great source of Vitamin C whilst the berries from the hawthorn bush help control blood pressure, anxiety and aid digestion. The properties and potential of nettles, acorns and hogweed rounded off our foraging venture halted by the lack of light.

The menu is a list of local meats. The area is well-known for its beef, but it’s also the hunting season and we enjoy some fresh local venison, mixed with a ‘pesto’ sauce made with the local wild herbs plucked from the campsite by the foraging group earlier.

The local wine from the 3 Choirs Vineyard helped us to bed down quickly for the night. zzz

The Marcle Ridge is a long escarpment that runs from above the village of Much Marcle, northwards towards Hereford. We start in the village and slowly ascend through farmland stripped of its summer crop, up to the ridgeline and along. On this side, the views across to the Malvern Hills are spectacular in an understated, English way. Swinging around to the right (east), we see the entire edge of the North Cotswolds, running from Worcestershire down to Cheltenham, with The River Severn and Avon splitting us in half.

The walk takes us on the Herefordshire Way and across the narrow ridge of Marcle, the River Wye on the left, unseen as it winds its way towards Ross and the Forest of Dean, the ancient hunting ground of Henry VIII clearly visible to the south.

As we continue through farmland, woods and narrow lanes the views open up in the other direction with the Welsh landscape from the Brecon Beacons to the Black Mountains dominating the picture. To the north of that we get a glimpse of Shropshire’s The Long Mynd, from one side to the other, it’s a solid 50-60 miles of land that can be seen.

After almost 3 hours we arrive in the tiny village of Woolhope and The Crown Inn. It’s a classic English country pub, serving good food – the difference is they pair that with local cider and perry. Here, they make their own cider under the brand Kings. Personally I’m not a fan of mass produced cider but the vintage (7.5%) version that we tasted after the walk was a treat of intense apple flavoured juice that went down rather too well.

We all found our fantastic Maier Sports kit the ideal companion for a walk like this one. Lightweight and easy to wear, comfortable and functional and although we were blessed with decent weather, ready to help us out in case of a storm. For some, the faint scent of apple grew slightly stronger as we enjoyed a hearty lunch and made our way back to Ledbury…it’s the kind of outdoor experience only walking can bring and in these difficult times, the ideal medicine that many of us can enjoy.

Maier Sports has an extensive collection of men’s and women’s ski, outdoor and lifestyle clothing that brings together high-quality functionality with mid-range pricing – but one of its key point of differences is the range of sizes that is available in both the trousers and jacket collection.
Ski pants are available in 61 different sizes alone, with a combination of waist width and leg lengths ensuring a perfect, almost bespoke fit, for all.
The company was founded in 1938 close to the Swabian Alp area of Germany, but it wasn’t until 1970 until what was a fabric making business, started to manufacture clothing for skiing and tennis. Today, Maier Sports is one of the most established brands in the outdoor industry and continues to innovate through design and quality.
Maier Sports has a strong sustainability story and was the very first outdoor company to start producing PFC-free fabrics and has more recently become 100% PFC-free in its outdoor stretch pant collection. The company is a member of the Fair Wear Foundation. 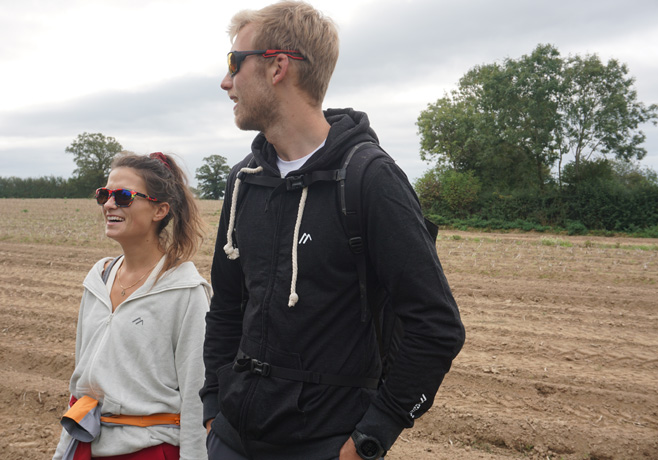