Following the World Cup Mountain Biking events in 2019 and 2021, Les Gets has once again become THE French destination for mountain biking – now the World Championships are making a comeback.

The UCI Mountain Bike World Championships which will be held in the resort during August 2022, in co-operation with the French Federation of Cycling (FFC).

Building on the success of the previous edition, Les Gets is keen to once again welcome elite mountain bike athletes to one of the homes of the sport. It will also be an opportunity for the athletes to shine on the Gétoise tracks which have produced the greatest champions in previous competitions, organised for over 30 years.

Whilst retaining its original route on the side of Les Chavannes, the Olympic Cross-Country course (XCO) has evolved significantly this year with new lines and the addition of many technical sections. The terrain is now more challenging for the riders and more spectacular for the public. The circuit has two loops with two parallel climbs and two descents, it’s physically demanding with its variations in height and features such as ‘Rock Garden’, stepping stones, jumps, roots and pebbles.

This track will also serve as a base for the Cross-Country Short Track (XCC) events, shorter and more intense with good duels to be expected, as well as Cross-Country Relay (XCR), a mixed team event.

For the Downhill (DHI), the course is based on a new track that has developed over the summer of 2021. The route offers fast and technical sections on the slopes of Mont-Chéry, combining all the ingredients for a committed descent and is physically challenging for riders.

Finally, a new route is being considered to accommodate the E-MTB events, which should take up the lower sections of the Cross-Country circuit.

The Official Poster is unveiled at Roc d’Azur 2021

The members of the Organizing Committee of the UCI Mountain Bike World Championships Les Gets 2022, led by Alexis Bongard, director of Les Gets Tourisme and the French Cycling Federation (FFC), represented by Éric Jacoté, vice-president in charge of mountain biking, took advantage of the Roc d´Azur Mountain Bike Festival to announce the event, in the presence of Julien Absalon, double Olympic champion and quadruple World Champion from Les Gets in 2004, and Jordan Sarrou, 2020 Cross-Country World Champion.

“Les Gets continues its momentum after the success of the 2019 and 2021 World Cups. The whole resort is preparing with energy and passion for this unmissable event that are the World Championships UCI MTB. We look forward to welcoming all the athletes to our destination for a week of competition under the title of sharing, emotion and celebration. We know from experience that the French public has always known how to respond by showing unparalleled fervour and enthusiasm, we will now welcome them all. All the necessary conditions will be met to make this meeting an unforgettable event .”

“After the success of the UCI Mountain Bike World Championships in 2004, which crowned the Frenchman Julien Absalon, the FFC and the resort of Les Gets will once again be co-organizers of this global event and will thus join forces to welcome the Elite of international mountain biking, two years before the Olympic Games in Paris. The French Cycling Federation is now part of an active process of organizing major international events. In 2022, France, Land of Cycling par excellence, will also be the scene of the World Championships of BMX (Nantes) and Track (Saint-Quentin-en-Yvelines) UCI.”

“The resort of Les Gets is part of my history. In 2004, two weeks after my Olympic title, I won my first World Championship in front of the French public. Over the years, we are often returning to Les Gets with the French team.”

Les Gets: Bike Land and Playground 2024

Since 1992, the singletracks in Gétoise area have seen the greatest mountain bikers of recent decades compete against each other.
On the leisure side, the Bikepark des Gets welcomes enthusiasts of all ability levels, including adults and children.

The park is accessible to experts and beginners alike and is subject to continuous development, offering a magnificent playground in the different disciplines of mountain biking (Downhill, Cross-Country, e-MTB, Freestyle, Freeride).

The village of Les Gets is also labelled “Terre de Jeux 2024” and has been selected to be CPJ – Centre de Preparation for the Paris 2024 Games for Cross-Country MTB. The station is therefore fully ready for the reception of XCO teams as part of future training programs.

The mountain resort of Les Gets is located about 1 hours’ drive from Geneva Airport in the northern French Alps. It’s linked with 12 other resorts in the Portes Du Soleil region that total 293 ski runs and 189 lifts during the winter and provides a network of lifts serving both hiking and mountain biking during the summer.

Les Gets is regarded as one of the top mountain biking destinations in the world, with Europe's largest bike park that includes over 128 KMs of marked trails for all levels and regularly hosts the downhill and XCO (Cross Country Olympic) editions of the UCI Mountain Bike World Cup. The Mountain Bike World Championships with be held in the resort in 2022.

In town, there’s a number of hotels ranging from 4* to 2* as well as numerous chalets and apartments. There’s a total of 40 restaurants, on and off the mountain.

2021 Marks The Return Of The Mercedes-Benz UCI MTB World Cup To Les Gets
Final Stage of The 2021 Critérium Du Dauphiné to Finish in Mountain Resort of Les Gets
New Alta Lumina ‘Night Park’ To Open As Planned On July 31 In Resort Of Les Gets, France
Les Gets Opens Its Bike Park Following New Covid-19 Guidelines 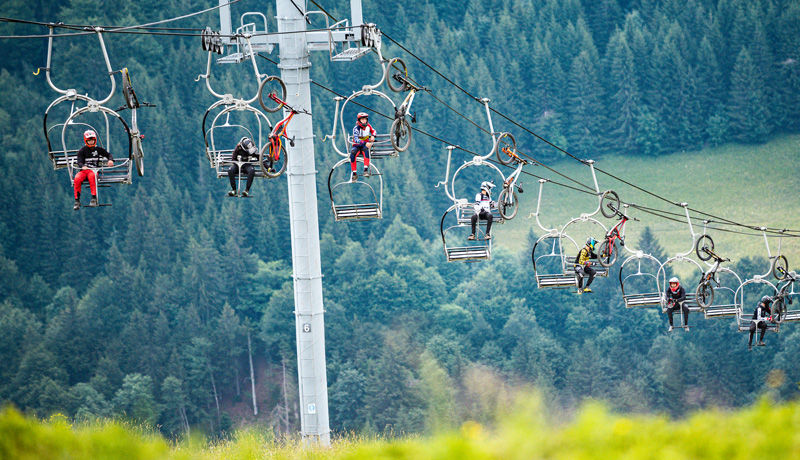